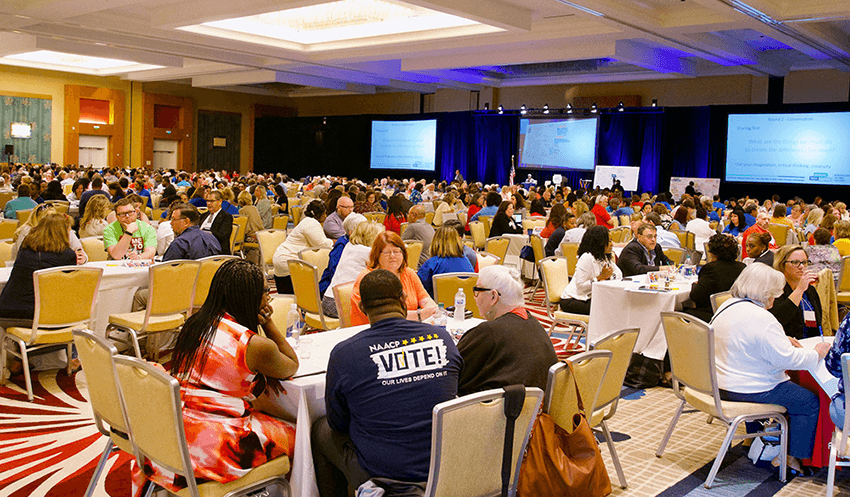 Nearly 1,000 educators, parents and community supporters came together in Orlando on May 18 for “Bringing Voices Together: An Education Summit for Florida’s Public Schools.”

In a day marked by thoughtful discussions and fiery motivational speeches, the conversation started with participants’ hopes for the summit and ended with their commitments for action in support of Florida’s neighborhood public schools.

“This conversation is about what we will do to make things better for our children,” Florida Education Association (FEA) President Fedrick Ingram told the crowd. “We do not have the answers. Today we’re asking you what you will do for our students and our schools.”

Speakers at the summit included Randi Weingarten, president of the American Federation of Teachers (AFT); Becky Pringle, vice president of the National Education Association (NEA); and Keron Blair, executive director of the Alliance to Reclaim Our Schools; along with FEA’s President Ingram, Vice President Andrew Spar and Secretary-Treasurer Carole Gauronskas.

The summit was sponsored by the Florida Education Association and its partners in the Coalition for Florida’s Public Schools, including:

The event was facilitated by World Café and structured as guided, small-group conversations that built both to overarching goals and to individual commitments to action, such as pledging to engage in difficult conversations — with friends, acquaintances and civic leaders — on the needs of our students and our public schools. World Cafe’s process included a graphic recording of some of the highlights of the summit.

The summit was open to anyone concerned about Florida’s public schools.

“We see this summit as the start of something big, a real grassroots movement that brings together many disparate voices for our schools,” said Ingram. “Along with the majority of people in Florida, we believe that public education is a fundamental good for this state and for the nation as a whole. But our neighborhood public schools are under attack — there’s no other way to describe it. If public education is going to have a future in Florida, it’s time for the people who care about our public schools to step forward and take control of the conversation.”

Attendees were clear that they wanted to continue the conversation, get back together to discuss the outcomes of the summit, and to give those who were unable to attend a chance to share their thoughts.

To that end the Coalition for Florida’s Public Schools will be holding a tele-town hall meeting on Thursday, June 6 at 6:00 p.m. Registration details to come.

Graphic Recordings from the “Bringing Voices Together” education summit

This column was originally published on Feb. 20, 2022, by the South Florida Sun Sentinel. By ANDREW GOTHARD, UFF President  The beatings will continue until morale improves. Such is the…

Neighborhood public schools are a vital part of our communities, and about 90 percent of Florida’s students are educated in public schools. Join us in celebrating public education and all…

As inflation grows and despite investments by the Legislature, Florida’s teachers remain stuck near the bottom nationally when it comes to average pay, according to new figures released today by…

For students to learn anything, Florida needs educators

As Gov. DeSantis today signs HB 7, a bill based on a manufactured political narrative, the Florida Education Association (FEA) must call out the fact that our students would be…

Read more about For students to learn anything, Florida needs educators

New law promotes falsehoods about schools, will aggravate shortage of teachers and staff

By signing the “Don’t Say Gay” bill, Gov. DeSantis has put a political agenda ahead of what’s best for our students.

Read more about New law promotes falsehoods about schools, will aggravate shortage of teachers and staff