There are hundreds of companies in Florida that have funded voucher schools through tax-credits. The state’s largest voucher organization that solicits these contributions is Step up for Students. Most of these companies are unaware of what they are actually funding.

Step Up has done a very good job of convincing many Florida corporations that its primary purpose is to help provide private-school vouchers to poor, mostly minority, students attending “failing” public schools. While we can never compete with Step Up’s financial resources, we are armed with something even more powerful: the truth.

We know that the vast majority of students who use vouchers were performing well in their public schools. We know this because the heads of the very private schools that accept vouchers have said as much when they are asked. 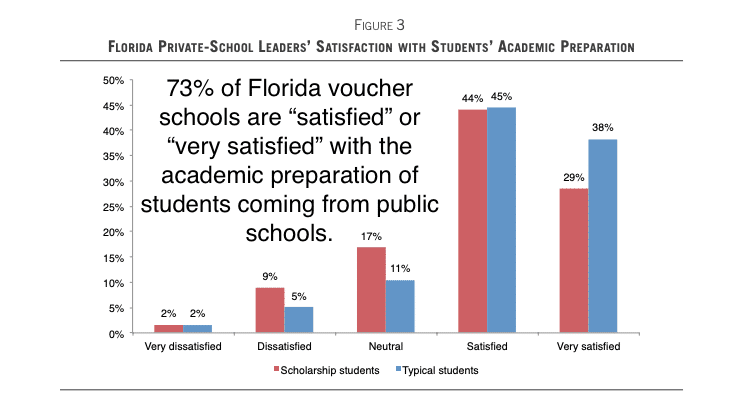 Furthermore, we know that the vast majority of parents didn’t take their child out of a public school because the school was “failing.” On the contrary, parents who use vouchers overwhelmingly do so explicitly because they want their child(ren) to have taxpayers subsidize a religious education. Again, we know this because parents have repeatedly said so. 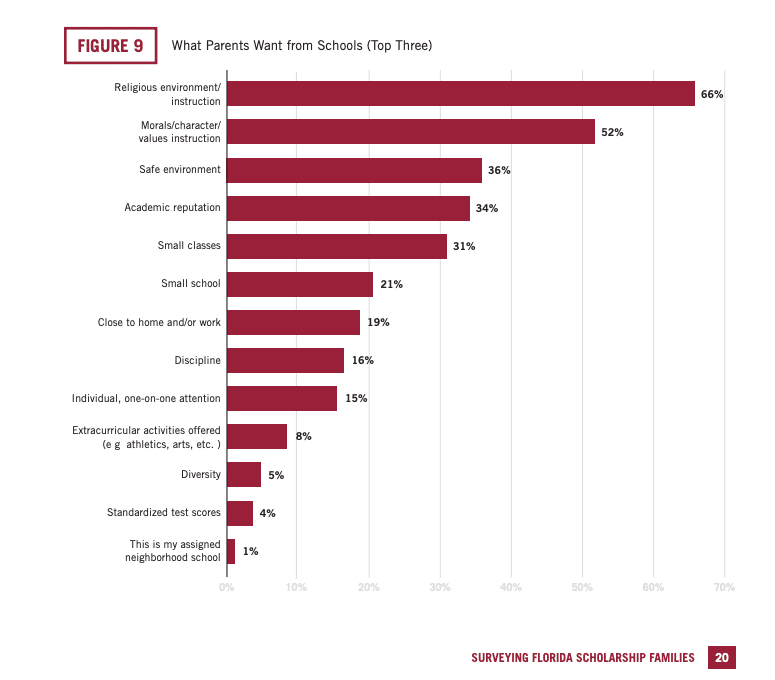 In fact, parents have been so explicit about their desire for a religious education, that when Step up for Students gives seminars to parents on how to advocate to lawmakers for voucher expansion, the organization cautions parents against mentioning their true reason for seeking out vouchers. 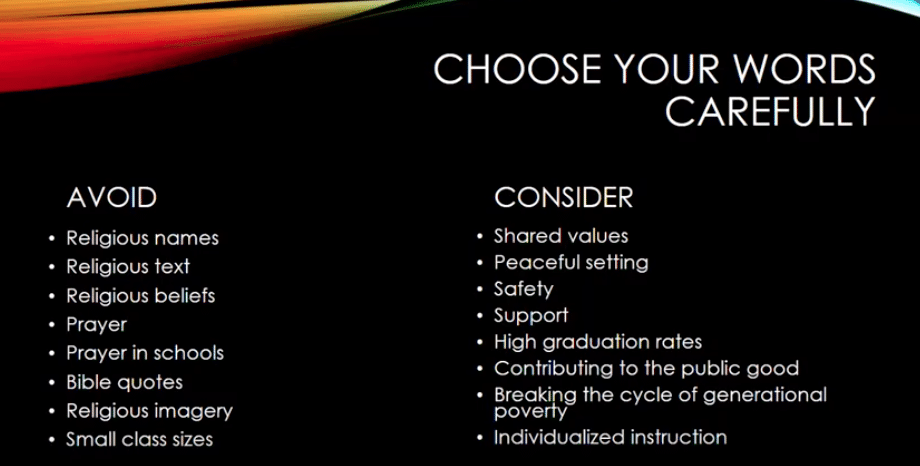 It turns out, Step Up has a good reason to try to keep parents’ true motives concealed. Many of these private schools accepting taxpayer dollars are steeped in bigotry—especially anti-LGBTQ+ bigotry. Check out these examples from student/parent handbooks across the state. 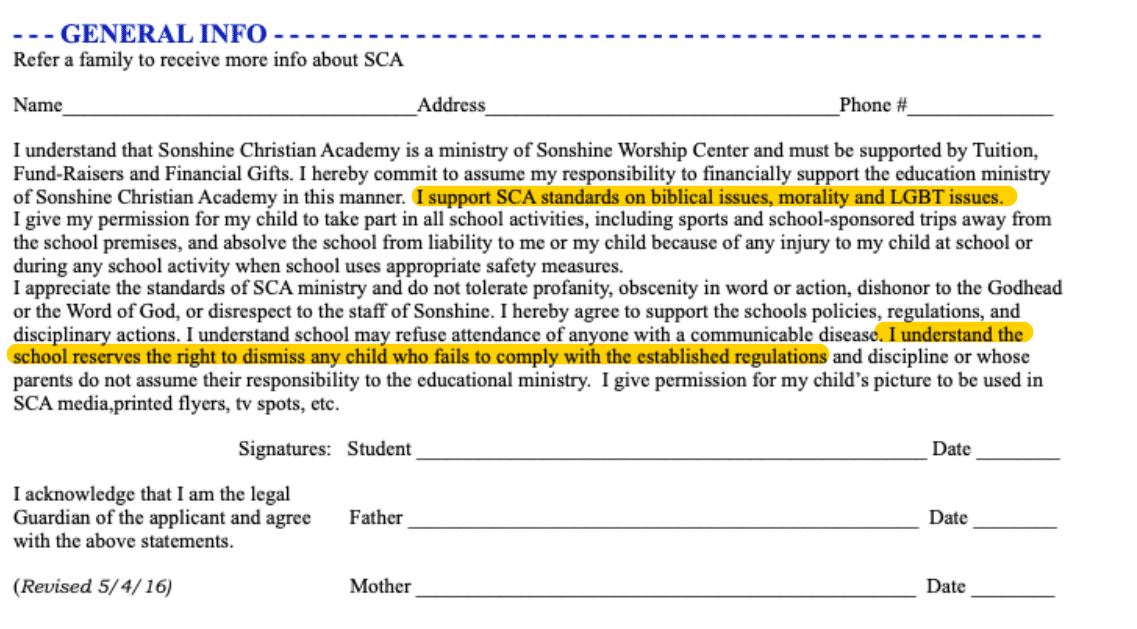 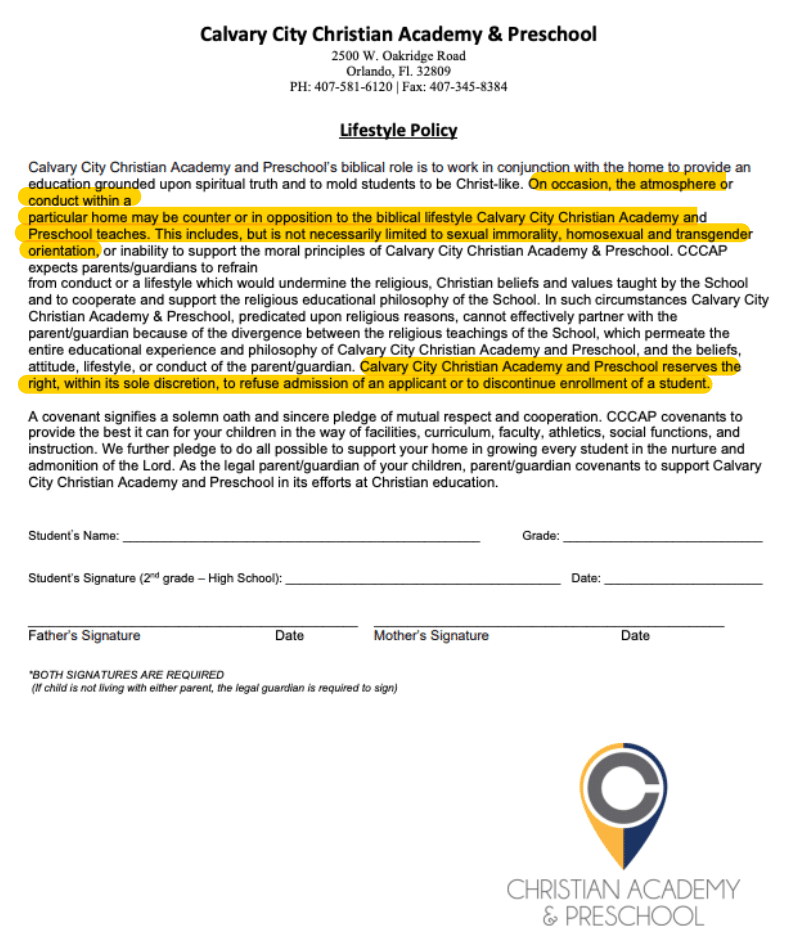 There is no easy way to know exactly how many voucher schools have these kinds of policies. Some schools have removed their policies from their websites, as Covenant Christian School did after this editorial ran in Florida Today. Undoubtedly, even more schools will pull their discriminatory practices from their websites in the wake of the great reporting from Scott Maxwell at the Orlando Sentinel.

There will be some politicians who claim they didn’t know that voucher schools often discriminate against LGBTQ students. But these claims are hard to believe. If they truly don’t know, it’s only because they haven’t paid attention for the past two years.

On April 29, 2019, when Senate Bill 7070 was being debated, Rep. Carlos G. Smith gave an impassioned plea for his amendment, which would have prohibited discrimination based on sexual orientation or gender identity.

Similarly, in 2018 Smith was one of the most outspoken legislators to oppose the “Hope” voucher for bullied students. As Smith pointed out, the number two and three reasons students are bullied are sexual orientation and gender identity respectively. Yet, initial reports indicated a full 10 percent of the private schools that signed up to accept the Hope voucher have zero-tolerance policies for LGBTQ students.

Rather than calling out schools like Calvary City Christian Academy & Preschools for their refusal* to admit LGBTQ students or students with LGBTQ parents, Gov. Ron DeSantis chose to use that school to announce his plan to create Florida’s sixth voucher program—the “Family Empowerment” voucher. 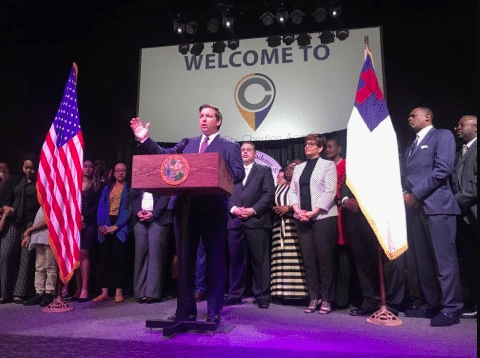 While many politicians have known about these schools and have turned a blind eye, many of the corporations who help to fund these schools through tax credits probably don’t know what they are funding. And it is our job to educate them!

It’s really simple to educate them:

In just the past few weeks several major funders, including Rosen Hotels and AAA Insurance, have said they will stop funding Step Up for Students as long as their money is going to schools that blatantly discriminate against the LGBTQ+ community. Other companies have not yet committed to stopping, but say they are evaluating their next steps.

Together, we can encourage other companies to follow the example of Rosen and AAA and ultimately encourage the Florida Legislature to truly Step Up for Florida’s LGBTQ+ citizens.

*On July 2nd, the pastor of Calvary Christian Academy & Preschool published a guest commentary in the Orlando Sentinel in which he claimed that his school does not discriminate against LGBTQ students and that their policies have been reflected to update that. However, we have reason to be skeptical of that claim; the “Lifestyle Policy” pictured above was still available on their website after the editorial was published.