School grades were released last week, and as every educator already knows, they tell us much more about income in the ZIP code where the school is located than about the successes happening inside those schools.

A few weeks ago, we detailed the correlation between income and school grades from the 2017-18 school grades. You can read that here. 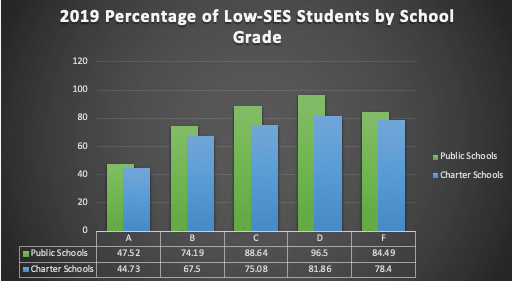 Florida’s students are still over-tested, and the schools they attend are still underfunded. There really isn’t too much to be learned from school grades that educators haven’t known for years.

With that in mind, we wanted to shine a light on one of aspects of Florida’s accountability system that isn’t as well-known or understood by parents and educators.

The ‘Lowest Performing’ List Is as Flawed as Grades

Along with the release of school grades, last week the Florida Department of Education released the annual list of the “300 Lowest Performing Elementary Schools.” As a measure of accountability this list is as flawed, if not more flawed, than school grades.

The first thing people might be surprised to know about these schools is that 23 of the “300 Lowest Performing” schools received a school grade of either A or B.

If that seems odd to you, it should. Odder still is where some of these schools actually rank in terms of school-grade points.

Seven schools on the list scored better on school grades than at least 1,000 other elementary schools. The best performing school on the list is Palm View Elementary in Manatee County. It performed better than 1,287 schools yet still was listed as one of the “300 Lowest.”

Let that sink in—Florida’s “accountability” system is so broken it expects us to believe each of the following three things are simultaneously true about Palm View Elementary:

Like school grades themselves, the list of “300 Lowest Performing Elementary Schools” has no meaning. The list serves as a proxy for the socioeconomic status and racial makeup of the school, but it does not actually inform about the quality of teaching and learning happening at the school.

Supporters of Florida’s “accountability” system might suggest that by focusing only on the schools’ current performance we are oversimplifying things and misrepresenting the true intent of the list of Florida’s “300 Lowest Performing Schools.”

To be clear, inclusion on the lowest-performing list is based not just on one year’s performance, but performance over three years.

However, that reality just leads to even more troubling questions including:

What Purpose — And Whose — Do Grades Serve?

It is becoming increasingly clear that parents should trust neither school grades nor the list of “low-performing” schools.

Here’s a dirty little secret: even the very legislators who created this system don’t really believe the accountability system to be effective.

Florida spends close to $1 billion annually on vouchers for unaccountable religious and private schools. Yet, Florida has never given these schools a grade. That alone should tell the public how little our elected officials actually believe in the meaning of school grades.

It’s worth asking the question, if even the legislators who celebrate this system of ranking and shaming Florida’s public schools don’t actually believe in it, why do they support it?

The answer here is simple, and something that many educators already know. Florida’s “accountability” system isn’t about accountability. Instead it is a tool used to justify the expansion of charter and voucher schools, to demean the professional educators who work in our public schools, and ultimately to end public education as we know it.